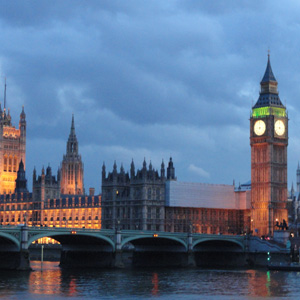 What do London, Paris, Venice, Florence, and Rome have in common (other than being some of Europe’s most exciting cities)? Shakespeare, of course! They are all locations for his plays-Macbeth, All’s Well That Ends Well, The Merchant of Venice, and Julius Caesar! You know what else they have in common? They’re all included on this 16-day Monograms vacation, where we’ve arranged your hotel reservations in each city, daily breakfast, sightseeing, transportation between cities, and transfers from/to your hotels to/from the train stations. Plus, to help your vacation run smoothly and to make sure you have a “friend in the city,” we’ve arranged the services of a Monograms Local Host® in each city, someone who is there for you throughout your stays. Your vacation begins the moment you arrive in London, where we can pick you up at the airport and whisk you seamlessly to your selected hotel. Here, your Local Host is waiting with a warm welcome and materials to help you get settled and start exploring immediately. The next morning, after an included breakfast, we’ll pick you up at your hotel for exclusive, guided sightseeing with a local expert, who will share the inside stories around London’s fascinating, must-see attractions. And it’s not just London…in each city we’ve arranged exclusive, guided sightseeing with an expert Local Guide. Your sightseeing includes some of Europe’s most famous attractions. In Paris, you’ll enjoy a Seine river cruise. In Venice, you’ll see St. Mark’s Square and Basilica; Doges Palace, with its gothic architecture, and the Bridge of Sighs, built in the 17th century. In Florence, the Ponte Vecchio has housed stores along its arched, stone bridge since the 13th century, and you’ll see it on your guided walking tour. Rome is a treasure trove of historic sights, and we’ll take you to many of them. You’ll visit St. Peter’s Square and Basilica, built in 313 AD and where even today the Pope often presides. We’ll also take you to the iconic Colosseum, built in the 1st century to hold 50,000 spectators, and the Roman Forum, built over 2,000 years ago at the height of the Roman Empire. In addition to the historic sights, your vacation includes many of Europe’s artistic highlights. We’ll take you to the one of the best panoramice viewing points for photos of the iconic Eiffel Tower. Your sightseeing in Venice includes a visit to watch glassblowers in action. Florence is known for its amazing artistic heritage, and your guided sightseeing will include the Academy of Fine Arts featuring Michelangelo’s David. In Rome, visit the Vatican Museums to see its remarkable treasures and the Sistine Chapel, where you’ll view Michelangelo’s The Last Judgment and his famous ceiling paintings. On the third day in each city, you’ll have the opportunity to explore on your own. Your Local Hosts will be on hand to help you arrange activities and offer suggestions. Perhaps take a cruise on the Thames River in London an excursion from Paris to the Palace of Versailles; from London to mysterious Stonehenge or to Windsor Castle, the world’s largest occupied castle; from Florence to San Gimignano, Italy’s most famous medieval town; and from Rome to Tivoli, the villa built by Hadrian at the peak of the Roman Empire. You may choose to just relax and have a drink in Venice’s St. Mark’s Square or at a café along the Champs-Elysées. The possibilities are endless! And don’t forget…your package includes transportation between cities. You’ll travel via the high-speed Eurostar train from London to Paris, which includes porterage. From Paris to Venice, we’ve included air on selected flights, along with transfers to/from the airports. For your travels between Venice, Florence, and Rome, we’ve included travel (first-class) via high-speed train as well as transfers to/from the train s tations. We know the train stations in Italy can seem confusing to visitors, so we’ll even make sure you get on the correct train! It’s just another way we ensure your vacation is all you want it to be!

Some interesting sites to visit are the castle where Michealangelo is supposedly tombed, the Arno River, which divides the city in half, with the historical district in the northern part, and the Oltrarno neighborhood to the south. The Piazza del Duomo is usually found with hundreds of tourists, and the Piazza Santa Maria Novella is a regular hangout for immigrants and tourists waiting for the train. Most of the streets are open only to pedestrians, so walking is a welcome reward for getting around, rather than by car or bus. Be sure to get a map with all of the interesting landmarks and entertainment to be found in this great city, available at the tourist office and most hotels. Take your time, there are many Renaissance palaces and Gothic churches to be experienced.

Restless, enduring and wonderful, London is Europe’s largest city. And surely, if you have the choice to visit only two or three cities of the world in your lifetime, by all means make one of them London.

The Romans started it all. The city they developed was “the square mile,” – and Londoners still hunt for Roman relics in the Thames. History is everywhere you look in London, yet today the city is as modern and metropolitan as any city on earth.

By day, London is buzzing with the frenetic pace of commerce not even Dickens could have imagined. By night, the excitement and glitter of theatres, cinemas, pubs and restaurants beckons throngs of travellers from around the world. But there is another London, a peaceful London of cool museums, quiet tea rooms, immaculate gardens and hushed churches.

There is Royal London – ancient pageantry in a modern kingdom – with its palaces, pomp and precise manoeuvres at the Changing of the Guard. And there’s outrageous London, the urban gathering ground for Cockney pitchmen, “fringe” theatre and the city’s youth, with their own distinctive style.

There is also Greenwich, easily accessed from central London by public transport, or take a more scenic route and arrive by riverboat. Notable for both its maritime history and royal heritage, it is perhaps best known for giving its name to the Greenwich Meridian (0° longitude) and Greenwich Mean Time, based at the Royal Observatory.

London, this extraordinary city of contrasts, holds a stunning abundance of hidden-round-the-corner surprises. You owe it to yourself to explore them all. Here, then, is the London you’ll come to know and remember.

As the French capital, Paris is the commercial, financial, and industrial focus of France, a major transportation hub, and a cultural and intellectual center of international renown. A beautiful city in which tourism is the main industry, Paris is cut by the Seine River. On its stately, formal right (northern) bank are many of the most fashionable streets and shops, and such landmarks as the Arc de Triomphe, Place de la Concorde, Louvre, and Sacré Coeur.

The left bank houses governmental offices and is the site of much of the city’s intellectual life. It is known for its old Latin Quarter and for such landmarks as the Sorbonne, the Luxembourg Palace, the Panthéon, and the modern Pompidou Center (see Beaubourg). The historic core of Paris is the Île de la Cité, a small island occupied in part by the Palais de Justice and the Cathedral of Notre-Dame de Paris. Above the city rises the Eiffel Tower. Paris is divided into 20 arrondissements (boroughs) and governed by a mayor.

A fishing village when it was conquered (52 B.C.) by Caesar, it became an important Roman town. It was a Merovingian capital in the 5th cent. and became the national capital with the accession (987) of Hugh Capet, count of Paris. It flowered as the center of medieval commerce and scholasticism but suffered severely during the Hundred Years War. Paris consistently displayed a rebellious and independent spirit, as in its resistance to Henry IV (1589-93); the first Fronde (1648-49); the revolutions of 1789, 1830, and 1848; and the Commune of Paris (1871). During World War II it was occupied (1940-44) by the Germans but was relatively undamaged.

Rome wasn’t built in a day…but you can tour it in just over 10 hours. A teeming anthill of humanity and antiquity intermingled with awful traffic jams, Rome grew up on the Tiber (“Fiume Tevere”) among seven low hills that rise from the river’s soggy eastern banks. It’s a city of many peeling layers of history, of which the bottom layer–that of the earliest Roman centuries–is the most interesting and still astonishingly whole. The hub of this layer is the Palatine Hill, the Forum, the Colosseum and the Circus Maximus.

On the western bank is the Citta Vaticana, the independent papal city where the Pope blesses pilgrims from all over the world. Neighboring Trastevere (“Across the Tiber”) is a mix of Roman, Greek and Jewish subcultures, great for little restaurants and nightlife. Further north on the other bank is “vecchia Roma,” medieval Rome of the Pantheon and Piazza Navona; Renaissance Rome is centered south of the Corso Vittorio Emanuele. Commercial Rome is the city of the Via del Corso, the Piazza del Popolo, the controversial Victor Emmanuel monument and finally the Stazione Termini, the nexus for all trains and roads from Rome.

As you approach the city over the bridge from the Italian mainland, you leave behind terra firma and, with it, earthbound notions of how to see and experience a city. Venice is not solely the spill of churches and palazzi on either side of the Grand Canal, but rather a city of islands, 118 in all, some of which are little more than the weedy, humps you see in the Lagoon of Venice. And yet these mud flats provided haven for the people who fled here (without benefit of a bridge) from Huns, Visigoths, and other marauders in the fifth century. And those refugees gave birth to a culture that ripened into a thousand years of greatness.

As you near the end of the bridge, you see at first only the back side of the city itself. But in the time it takes to walk through the train station, you begin to hear sounds peculiarly Venetian–the low rumble of boat motors, a humid incubation of voices, water lapping insistently against wood and stone. And then Venice confers her greatest gift: No matter how many times you’ve been here, it always seems, in that first glimse, like the first time.

If you are smart, you will immediately start a tour down the Grand Canal by hopping on a vaporetto (water bus) or gondola or water taxi. If you are lucky, it will be during those few hours before sunset when the light shines most kindly on the venerable facades that line this liquid boulevard. If you are particularly observant, you might even notice that neither the light nor the colors are quite Italian, not like the tawny earth tones of Florence or Rome.

The canal is a murkey green, the palazzi a mix of faded, grimy sherbets–watermarked mint and sun-blanched apricot and deep overripe peach. Sunlight shatters into spangles on the water, gondolas knife bach and forth, the Rialto Bridge looms overhead, and then, beyond one final curve, the Palladian church of Santa Maria della Salute and the Campanile (bell tower) of San Marco come into view.

Piazza san Marco is Venice’s grand salon–expansive, familiar, picturesque, pigeonesque. It is anchored at its eastern extreme by the Basilica di San Marco, which is not only the spiritual seat of Venice’s patron saint but also one of the most glittering monuments of Christendom.

The “Package Price” price is based on the lowest price available to book. Price is per passenger based on double occupancy and does not include airfare. Pricing may vary on this date due to hotel availability. Some packages require intra-vacation flights (and in some cases intra-vacation segments must be purchased from Monograms).

Click on the buttons below to request a quote on this deal or contact us directly with further questions or comments.

Request A Quote Send To A Friend Have A Question? Contact Us

Send To A Friend